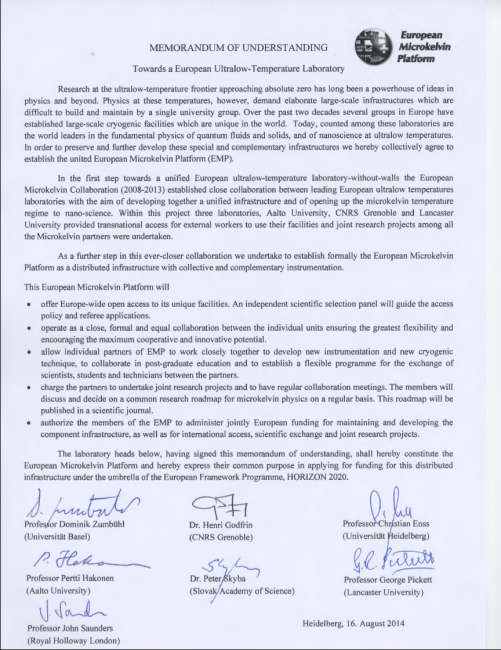 Funding
EMP is funded through the Horizon2020 programme of the European Commission.

EMP builds on the very successful FP7 MICROKELVIN Integrating Network which led to the integration of the three leading microkelvin laboratories in Europe, in Grenoble (FR), Helsinki (FI) and Lancaster (UK), along with the activities of a cluster of other European centres. A primary aim of that activity was the opening up of the microkelvin temperature regime to nanoscience and much of the activity was devoted to building the necessary research infrastructure within an already integrated environment. The level of European coordination and common working generated was surprising even to us. There are now nearly ten new microkelvin facilities built in Europe with designs, components and expertise provided from all over the continent. Two new companies have been created, one of which, BlueFors, already has a turnover of € 10 million per annum. The FP7 MICROKELVIN inheritance has resulted in the existing centres working together well, with the integrated activities becoming self-sustaining. Great advantage has been taken of the routine circulation of personnel which the network initiated, including researchers, graduate students, technicians and administrators which we have found to be crucial for successful operation.

With EMP  we will further integrate, improve and augment the access already provided by the previously FP7 supported infrastructure, to create a major European "laboratory without walls". This will be done, first, by increasing the access-provision with the inauguration of the EMP of eight centres which will become integrated during the course of the activity. Secondly we will widen participation to further fields. Here a key instrument is the participation of five further sites, with excellence and expertise covering a broad range of topics, to diversify and develop our microkelvin measurement breadth and capability. The participants include six industrial partners and three associated partners (including one National Measurement Institute), which will contribute to specific projects and more generally promote innovation and impact, and improved metrology.